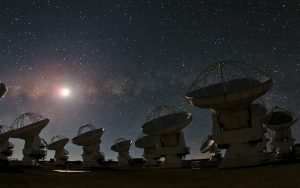 A crystal-clear sky on any night is always a joy to behold. But if you are on the Chajnantor Plateau, at 5000 metres altitude in the Chilean Andes and one of the best places in the world for astronomical observations, it could be an experience that you’ll remember for your whole life. This panoramic view of Chajnantor shows the antennas of the Atacama Large Millimeter/submillimeter Array (ALMA) against a breathtaking starry night sky. In the foreground, we can see some of ALMA’s antennas, working together. The plateau appears curved, because of the effect of the wide-angle lens used. ALMA is the world’s most powerful telescope for studying the Universe at submillimetre and millimetre wavelengths. Construction work for ALMA will be completed in 2013, and a total of 66 of these high-precision antennas will be operating on the site. At the moment, the telescope is in its initial phase of Early Science Observations. Even though it is not fully constructed, the telescope is already producing outstanding results, outperforming all other submillimetre arrays. In the sky above the antennas, countless stars shine like distant jewels. Two other familiar celestial objects also stand out. First, the image is crowned by the Moon. Second, outshone by the glow of the Moon, it is possible to distinguish the Milky Way as a hazy stripe across the sky. Dark regions within the band are areas where the light from background stars is blocked by interstellar dust. This photograph was taken by ESO Photo Ambassador, Babak Tafreshi. Babak is founder and leader of The World At Night, an international project to produce and exhibit a collection of stunning photographs and time-lapse videos of the world’s landmarks with a backdrop of the most beautiful celestial wonders. ALMA, an international astronomy facility, is a partnership of Europe, North America and East Asia in cooperation with the Republic of Chile. ALMA construction and operations are led on behalf of Europe by ESO, on behalf of North America by the National Radio Astronomy Observatory (NRAO), and on behalf of East Asia by the National Astronomical Observatory of Japan (NAOJ). The Joint ALMA Observatory (JAO) provides the unified leadership and management of the construction, commissioning and operation of ALMA. Links More about ALMA at ESO Joint ALMA Observatory ESO Photo Ambassadors