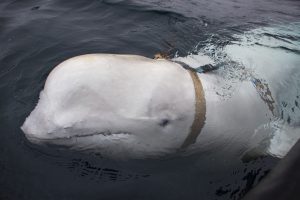 A beluga whale seen as it swims next to a fishing boat before Norwegian fishermen removed the tight harness, swimming off the northern Norwegian coast Friday, April 26, 2019. The harness strap which features a mount for an action camera, says “Equipment St. Petersburg” which has prompted speculation that the animal may have escaped from a Russian military facility. (Joergen Ree Wiig/Norwegian Direcorate of Fisheries Sea Surveillance Unit